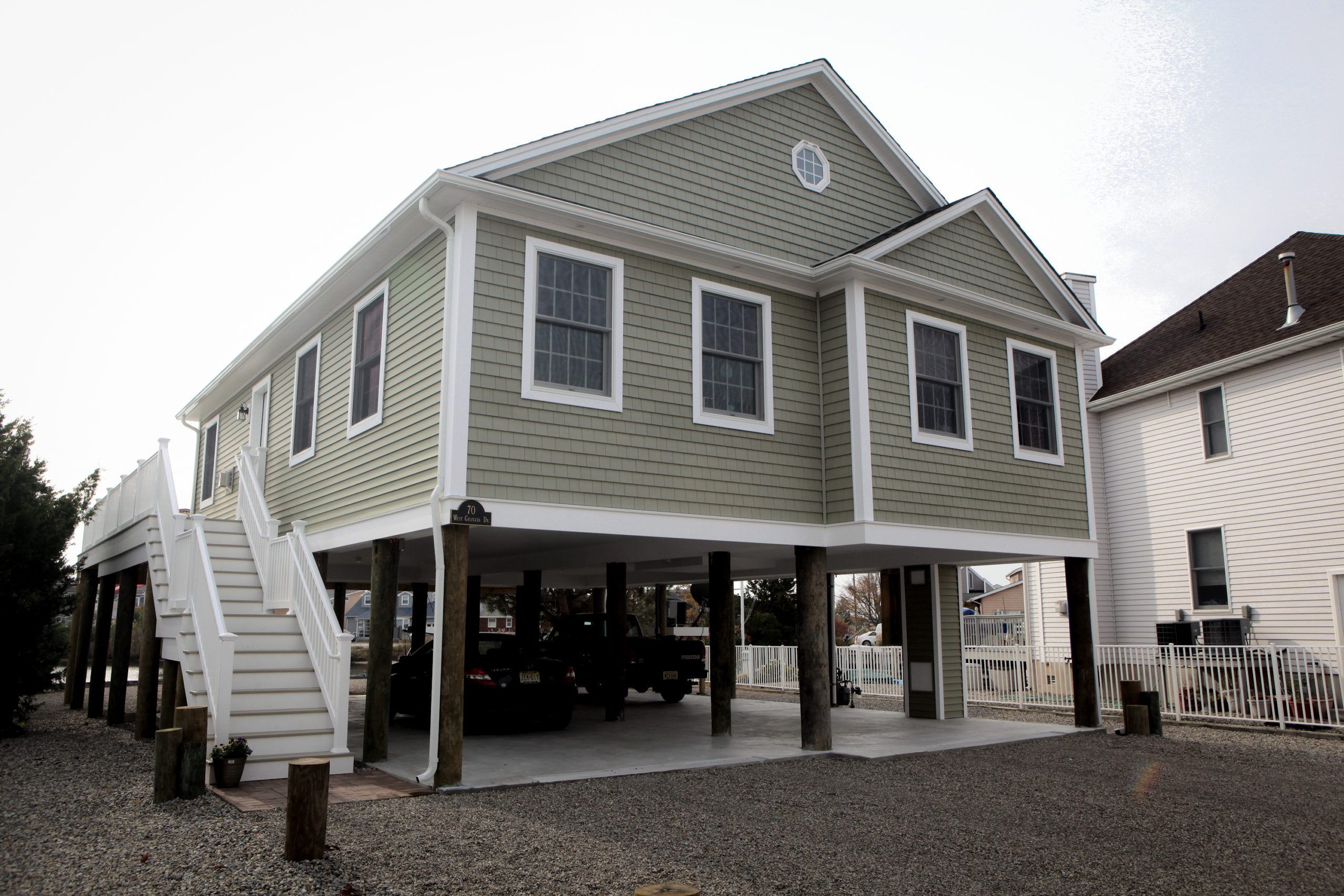 Builders of modular homes have long battled a perception in New Jersey and New York that their products were aimed at trailer parks, not charming beachfront communities. But since superstorm Sandy smashed homes along the coast, some see an opening. In the past few months, modular builders say they are seeing an uptick in demand that they hope will translate to long-term business, especially as new federal flood maps and insurance rates force more homeowners to elevate structures. Because many older beach bungalows won’t survive being raised, those owners may choose to replace them with new, easy-to-produce modular homes that are fabricated in factories and shipped in sections to the building site. Two days after Sandy struck, John Westrum, who has built modular homes primarily in Pennsylvania suburbs, took a helicopter ride to survey the devastation along the Jersey Shore and had an idea: He would take his prefab houses and put them on stilts.

Westrum Development’s first elevated modular home is scheduled to open Saturday in Seaside Heights. The two-story, Cape Cod was assembled in 28 days after the local permits were secured and the land was cleared. Former telephone poles were used to lift the first floor about 10 feet above the ground.

Although made in Scranton and trucked to New Jersey in four parts, the homes looked typically suburban and had custom features, such as a deck and large windows. At least 40 people are interested in buying one, Mr. Westrum said. He hopes to build 3,000 on the Jersey Shore and “up and down the East Coast.” Architects said the modular-construction industry’s improved quality control and ability to use materials in different ways have helped bring its buildings up to design standards in the city. “The day of modular housing is dawning in New York,” said Rick Bell, executive director of the American Institute of Architects New York.

As money trickles in from insurance companies and government, a handful of modular homes on stilts are popping up in some communities in New Jersey, Long Island and Staten Island. Many can be made to evoke beachside bungalows or modernist vacation homes. That has helped allay concerns about identical rows of new, cheap-looking homes. “It looks beautiful,” said Anthony Rusciano, a local 51-year-old utility worker in Seaside Heights who is buying a three-bedroom modular home from Westrum for $179,000. “It went up so fast. I don’t have the time or patience to deal with any of this stuff anymore. Modular single-family homes aren’t necessarily less expensive than traditional construction, but may save time because they can be built in the factory while owners are waiting for demolition and foundation work. Once the modules are built and transported to the city, it takes a day or two to bolt the pieces into place. Most of those who lost their home in New York City and Staten Island have yet to start rebuilding, so it is too early to tell if modular homes will be an important part of the rebuilding. New York City has been a tough market to crack because streets are too narrow to maneuver 14-foot wide homes, developers are unfamiliar with the method, and labor unions have resisted because their members are paid less for factory work. At least 10 homeowners in Breezy Point are applying for permits for modular construction, according to Arthur Lighthall, general manager of the community co-op in Queens.

One house was delivered this week. “This is not a trailer park home. This is a well-designed manufactured home. Side by side to a stick-built home, unless you knew, it’d be hard pressed to figure out which one was which,” Mr. Lighthall said. But Gerry Romski, who was recently selected by the city to help residents of Breezy and the Rockaways develop new homes said he won’t use modular construction due to concerns about quality, fire-resistance and sacrificing interior space to bulkier construction. “We’re doing a typical stick-built construction, which we have been doing for the last 25 years,” he said. John Colucci, vice president of sales and marketing, Westchester Modular Homes Inc., said while New York remains a tough market, he had been building one to two houses a week since the spring for Sandy victims primarily in New Jersey and Long Island. Sales are up 80% over last year, he said, mostly due to Sandy.

Mr. Colucci, who lived many years ago on the Jersey Shore, said he had a “soft spot” for the wooden bungalows that passed between generations, but he hadn’t seen demand to re-create the old. “There’s a certain nostalgia that in my opinion is going to be lost because of the storm. We’ve only had a select few come through and ask for bungalow-type housing. Now it’s all about how much can I put into my beach home,” he said, including roof decks, outside showers and vinyl siding that resembles cedar shakes. Michael Fehling, a 55-year-old Island Park resident, and his wife, decided to build a modular home seven feet in the air after docks smashed into their 90-year-old wooden house. Their new home took about a week to build in the factory and was delivered from Pennsylvania a month ago. They plan to move in at the end of August, after contractors finish with touches such as radiant heat and fireplaces. He doesn’t miss the old place. “A house that’s almost 90 years old, it’s not going to have the insulation.It’s not going to be built as strong. The house was always cold. The house wasn’t level,” he said. “With the breeze going through the whole house, I don’t miss that.”